Below we have given links to two videos to whet your appetite for your holiday!

Isle of Wight, by drone, Vimeo

Once you've decided on the Isle of Wight for your holiday, can we suggest that, as well as consulting our own 'things to do' page, you visit the Isle of Wight Guru website for all things Island related. This informative site gives details and advice on days out and attractions, beaches, food and drink and lots more.

Walking on the Island

If walking is your thing (and the Island is very popular with walkers) then take a look at https://www.redfunnel.co.uk/en/isle-of-wight-guide/activities/walking/ for links to pdf maps to various walks / routes.

The Isle of Wight (or The Island as it is known locally), is approximately 25 miles East to West and 13 miles North to South so you’re never more than a few miles from the sea. It has 57 miles of coastline (or 69 miles if you’re following the IoW coast path) and over 500 miles of walks. Just over half of the island’s 148 square miles have been designated an Area of Outstanding Natural Beauty and in June 2019 the whole island was designated a UNESCO Biosphere Reserve (whatever that is!)

The coastline varies enormously from towering cliffs to river estuaries, secluded coves for rock-pooling and beautiful sandy beaches perfect for sun-bathing. There are vast windswept swathes of sand perfect for dog walking and marinas full of boats if you prefer to gaze longingly at the wealth of others. Odd facts; some parts of the North coast get 4 high tides a day! Whilst often thought part of Hampshire, the Isle of Wight is England’s smallest county...but only at high tide! Once the tide falls back to its lowest, the county of Rutland reclaims its mantle. 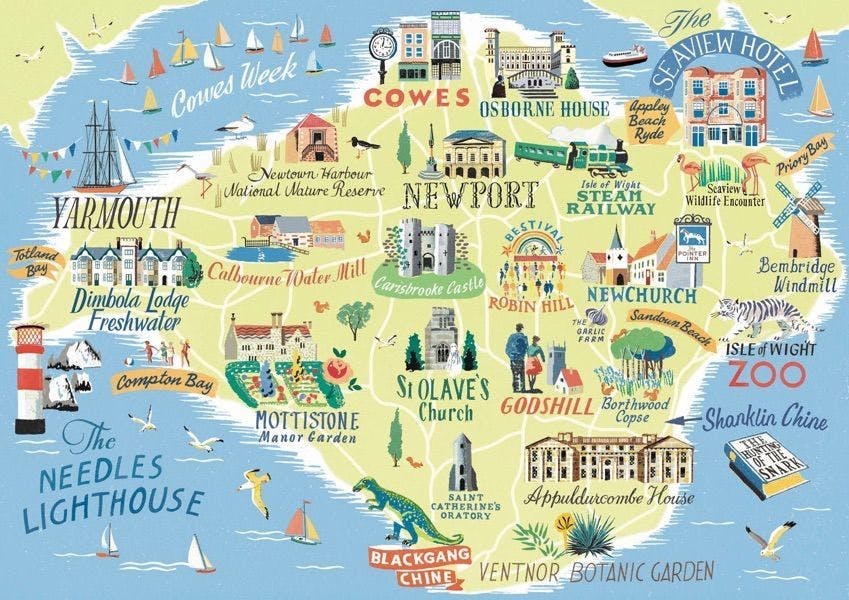 Since the 19th century, when Queen Victoria and Prince Albert bought Osbourne House, the Island has been a popular holiday and short break destination. That trend continues today with up to 300 ferry crossings a day helping an annual 2.5 million visitors to start their holiday adventure. After Queen Victoria’s death in 1901 Osbourne House was given to the nation and has been one of the island’s favourite tourist destinations ever since.

Nowadays the island is as well known for its other attractions: